Beyond the Reach of Empire: Wolseley's Failed Campaign to Save Gordon and Khartoum 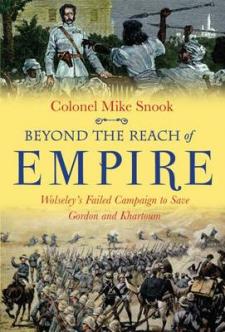 In the early 1880s the Mahdi unleashed a spectacularly successful jihadist uprising against Egyptian colonial rule in the Sudan. Early in1884 Cairo bowed to British pressure to withdraw. Beyond the Reach of Empire describes how Major General Charles Gordon was despatched to evacuate Khartoum and turn the Sudan over to self-rule. It goes on to explain how and why the mission backfired, and then homes in on Sir Garnet Wolseley's planning and execution of the long-delayed Gordon Relief Expedition which arrived, according to popular myth, only two days after the city had fallen and Gordon had been killed. Colonel Mike Snook's narrative is characterized by scrupulous attention to detail, an instinctive grasp of the period, and an intimate understanding of its setting. The author argues compellingly that the Khartoum campaign was mismanaged from the outset. The outcome is the exoneration of Colonel Sir Charles Wilson, the man cast in the role of scapegoat, and an indictment of Wolseley's generalship over the course of the last and most deeply flawed campaign of his career.