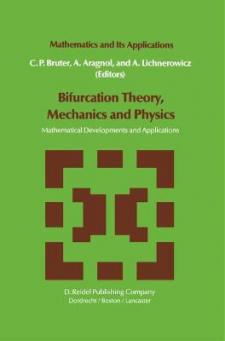 This volume presents the proceedings of a colloquium inspired by the former President of the French Mathematical Society, Michel Herve. The aim was to promote the development of mathematics through applications. Since the ancient supports the new, it seemed appropriate to center the theoretical conferences on new subjects. Since the world is movement and creation, the theoretical conferences were planned on mechanics (movement) and bifurcation theory (creation). Five aspects of mechanics were to be presented, but, unfortunately, it has not been possible to include the statis- tical mechanics aspect. So that only four aspects are presented: Classical mechanics (Hamiltonian, Lagrangian, Poisson) (W.N. Tulczyjew, J .E. l-lhite, C.M. MarIe). - Quantum mechanics (in particular the passage from the classi- cal to the quantum approach and the problem of finding the explicit solution of Schrodinger's equation)(M. Cahen and S. Gutt, J. Leray). Fluid mechanics (meaning problems involving partial differ- ential equations. One of the speakers we hoped would attend the conference was in Japan at the time, however his lecture is presented in these proceedings.) (J.F. Pommaret, H.I-l.
Shi) - Mathematical "information" theory (S. Guiasll) Traditional physical arguments are characterized by their great homogeneity, and mathematically expressed by the compactness prop- erty. In such cases, there is a kind of duality between locality and globality, which allows the use of the infinitesimal in global considerations.