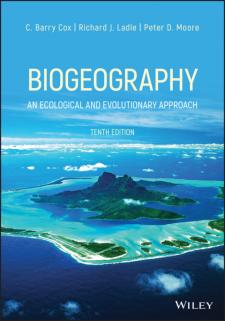 Through nine successful editions, and for over 45 years, Biogeography: An Ecological and Evolutionary Approach has provided a thorough and comprehensive exploration of the varied scientific disciplines and research that are essential to understanding the subject. The text, noted for its clear and engaging style of writing, has been praised for its solid background in historical biogeography and basic biology, that is enhanced and illuminated by discussions of current research.

This new edition incorporates the exciting changes of the recent years and presents a thoughtful exploration of the research and controversies that have transformed our understanding of the biogeography of the world. New themes and topics in this tenth edition include:

Biogeography: An Ecological and Evolutionary Approach reveals how the patterns of life that we see today have been created by the two great Engines of the Planet: the Geological Engine, plate tectonics, which alters the conditions of life on the planet, and the Biological Engine, evolution, which responds to these changes by creating new forms and patterns of life.