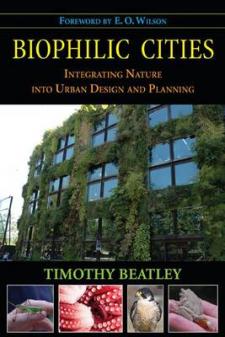 Tim Beatley has long been a leading advocate for the "greening" of cities. But too often, he notes, urban greening efforts focus on everything except nature, emphasising such elements as public transport, renewable energy production, and energy efficient building systems. While these are important aspects of re-imagining urban living, they are not enough, says Beatley. We must remember that human beings have an innate need to connect with the natural world (the biophilia hypothesis). And any vision of a sustainable urban future must place its focus squarely on nature, on the presence, conservation, and celebration of the actual green features and natural life forms. A biophilic city is more than simply a biodiverse city, says Beatley. It is a place that learns from nature and emulates natural systems, incorporates natural forms and images into its buildings and cityscapes, and designs and plans in conjunction with nature. A biophilic city cherishes the natural features that already exist but also works to restore and repair what has been lost or degraded.
In Biophilic Cities Beatley not only outlines the essential elements of a biophilic city, but provides examples and stories about cities that have successfully integrated biophilic elements - from the building to the regional level - around the world. From urban ecological networks and connected systems of urban green space, to green rooftops and green walls and sidewalk gardens, Beatley reviews the emerging practice of biophilic urban design and planning, and tells many compelling stories of individuals and groups working hard to transform cities from grey and lifeless to green and biodiverse.