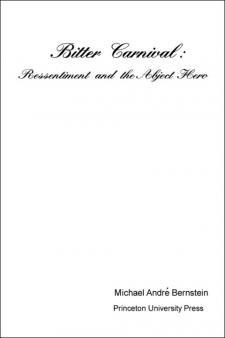 "You people put importance on your lives. Well, my life has never been important to anyone. I haven't got any guilt about anything," bragged the mass-murderer Charles Manson. "These children that come at you with knives, they are your children. You taught them. I didn't teach them. . . . They are running in the streets--and they are coming right at you!" When a real murderer accuses the society he has brutalized, we are shocked, but we are thrilled by the same accusations when they are mouthed by a fictional rebel, outlaw, or monster. In Bitter Carnival, Michael Andr Bernstein explores this contradiction and defines a new figure: the Abject Hero. Standing at the junction of contestation and conformity, the Abject Hero occupies the logically impossible space created by the intersection of the satanic and the servile. Bernstein shows that we heroicize the Abject Hero because he represents a convention that has become a staple of our common mythology, as seductive in mass culture as it is in high art. Moving from an examination of classical Latin satire; through radically new analyses of Diderot, Dostoevsky, and Cline; and culminating in the courtroom testimony of Charles Manson, Bitter Carnival offers a revisionist rereading of the entire tradition of the "Saturnalian dialogue" between masters and slaves, monarchs and fools, philosophers and madmen, citizens and malcontents. It contests the supposedly regenerative power of the carnivalesque and challenges the pieties of utopian radicalism fashionable in contemporary academic thinking. The clarity of its argument and literary style compel us to confront a powerful dilemma that engages some of the most central issues in literary studies, ethics, cultural history, and critical theory today.