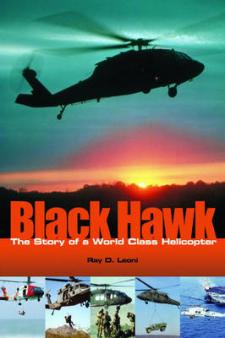 This story tells, in clear detail, how Sikorsky Aircraft developed, tested, modified, and produced one of the most successful helicopters in the world. Written by the man considered to be the father of the Black Hawk, Ray Leoni explains how Sikorsky used innovative designs with the right advanced technologies to meet the Army's stringent specifications for aircraft performance, survivability and reliability. With its creative Black Hawk design, Sikorsky won an uphill, highly-contested battle for one of the world's largest helicopter programs which reestablished the company as a leader in the world community of helicopter producers.Black Hawk variants have been put in service by every branch of the US Military and by over 24 countries around the world accumulating over 5 million flight hours. Through its combat service in the campaigns of Granada, Panama, Somalia, Afghanistan and Iraq, the Black Hawk has demonstrated unprecedented mission versatility and survivability and proven itself to be an outstanding war-fighting machine that will serve for a half century or longer.In the best tradition and vision of Igor Sikorsky, Black Hawks are performing world-wide rescue and humanitarian missions saving countless lives and providing relief from natural and manmade disasters to thousands of people across the globe.The Army program began in 1972 with the issuance of Requests for Proposals for the Utility Tactical Transport Aircraft System to the U.S. helicopter industry. Both Boeing Vertol and Sikorsky were awarded contracts to design and build prototype Black Hawks for Army side-by-side evaluation. Those awards set off an intense 4-year competition between the two companies that culminated in the final production selection in 1976. That competition focused on developing the best possible helicopter to offer for production selection by the Army following a 7-month fly off evaluation. During this critical evaluation, a night-time crash occurred of one of Sikorsky's three prototypes with 14 Army personnel aboard.This book shows the cause and results of that crash and describes how its consequences actually strengthened Sikorsky's competitive position.It also describes in considerable technical detail the problems encountered by Sikorsky during prototype development in vibration, speed performance, maneuverability and handling qualities and how they were solved in time for the production award. Many of the key people responsible for the success of the Black Hawk program are identified throughout this book. Readers will benefit from the unique insights into the challenges of helicopter development as well as successful management strategies presented in this book.