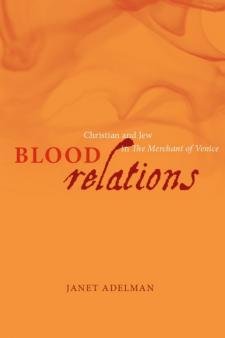 In Blood Relations, Janet Adelman confronts her resistance to The Merchant of Venice as both a critic and a Jew. With her distinctive psychological acumen, she argues that Shakespeare's play frames the uneasy relationship between Christian and Jew specifically in familial terms in order to recapitulate the vexed familial relationship between Christianity and Judaism.Adelman locates the promise-or threat-of Jewish conversion as a particular site of tension in the play. Drawing on a variety of cultural materials, she demonstrates that, despite the triumph of its Christians, The Merchant of Venice reflects Christian anxiety and guilt about its simultaneous dependence on and disavowal of Judaism. In this startling psycho-theological analysis, both the insistence that Shylock's daughter Jessica remain racially bound to her father after her conversion and the depiction of Shylock as a bloody-minded monster are understood as antidotes to Christian uneasiness about a Judaism it can neither own nor disown.In taking seriously the religious discourse of The Merchant of Venice, Adelman offers in Blood Relations an indispensable book on the play and on the fascinating question of Jews and Judaism in Renaissance England and beyond.