A Bold Stroke for a Wife 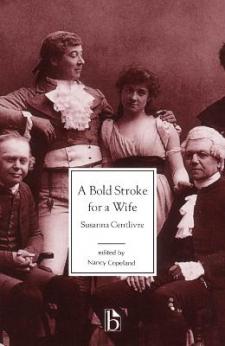 Though critics and literary historians have always had to admit that Susanna Centlivre's comedies were extremely popular, they have tended to devote themselves to a search for evidence in them of supposed deficiencies of 'the female pen,' and to pay as much attention to the playwright's marriages and amorous liasons than to the plays themselves. Only in recent years has Centlivre come to be recognized quite straightforwardly as on of the most brilliant playwrights of her time.

A Bold Stroke for a Wife is perhaps the finest example of Centlivre's masterful plotting of comic intrigue. The soldier Fainwell and Anne Lovely are in love, but their path to the altar is blocked by her guardians, each of whom has a different view of what sort of husband would make the right match. Fainwell resorts to disguises of social types. The play thus provides a wide range of opportunity for Centlivre to satirize Tory respectability, religious propriety and capitalist speculative greed-and to give voice to tolerance: 'tis liberty of choice that sweetens life.' Yet in the end it is Centlivre's comic muse that gives enduring life to the play as one of the most entertaining of eighteenth-century comedies.