From Bonaventure to Bellini 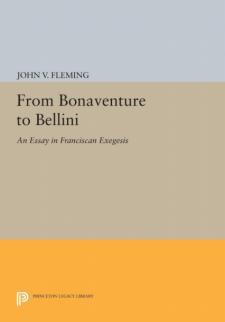 In this study of Giovanni Bellini's great masterpiece, the so-called Frick St. Francis, John V. Fleming moves beyond earlier discussions of the work to offer a detailed and comprehensive iconographic analysis, with the further intention of exploring the nature of the medieval Franciscan imagination and showing how fundamental Franciscan ideas ideas often by nature more poetic and pictorial than discursive found powerful expression in word and image. Originally published in 1983. The Princeton Legacy Library uses the latest print-on-demand technology to again make available previously out-of-print books from the distinguished backlist of Princeton University Press. These editions preserve the original texts of these important books while presenting them in durable paperback and hardcover editions. The goal of the Princeton Legacy Library is to vastly increase access to the rich scholarly heritage found in the thousands of books published by Princeton University Press since its founding in 1905.