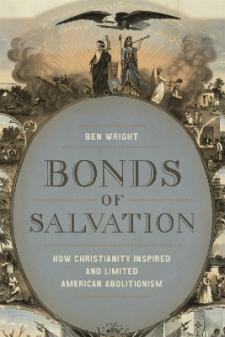 Ben Wright's Bonds of Salvation demonstrates how religion structured the possibilities and limitations of American abolitionism during the early years of the republic. From the American Revolution through the eruption of schisms in the three largest Protestant denominations in the 1840s, this comprehensive work lays bare the social and religious divides that culminated in secession and civil war. Historians often emphasize status anxieties, market changes, biracial cooperation, and political maneuvering as primary forces in the evolution of slavery in the United States. Wright instead foregrounds the pivotal role religion played in shaping the ideological contours of the early abolitionist movement.

Wright first examines the ideological distinctions between religious conversion and purification in the aftermath of the Revolution, when a small number of white Christians contended that the nation must purify itself from slavery before it could fulfill its religious destiny. Most white Christians disagreed, focusing on visions of spiritual salvation over the practical goal of emancipation. To expand salvation to all, they created new denominations equipped to carry the gospel across the American continent and eventually all over the globe. These denominations established numerous reform organizations, collectively known as the ""benevolent empire,"" to reckon with the problem of slavery. One affiliated group, the American Colonization Society (ACS), worked to end slavery and secure white supremacy by promising salvation for Africa and redemption for the United States.

Yet the ACS and its efforts drew strong objections. Proslavery prophets transformed expectations of expanded salvation into a formidable antiabolitionist weapon, framing the ACS's proponents as enemies of national unity. Abolitionist assertions that enslavers could not serve as agents of salvation sapped the most potent force in American nationalism Christianity and led to schisms within the Presbyterian, Baptist, and Methodist churches. These divides exacerbated sectional hostilities and sent the nation farther down the path to secession and war. Wright's provocative analysis reveals that visions of salvation both created and almost destroyed the American nation.