'Boredom is the Enemy' 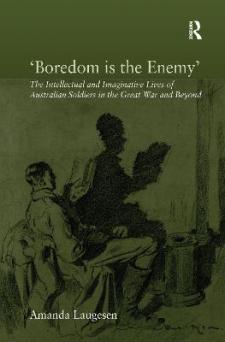 War is often characterised as one percent terror, 99 per cent boredom. Whilst much ink has been spilt on the one per cent, relatively little work has been directed toward the other 99 per cent of a soldier's time. As such, this book will be welcomed by those seeking a fuller understanding of what makes soldiers endure war, and how they cope with prolonged periods of inaction. It explores the issue of military boredom and investigates how soldiers spent their time when not engaged in battle, work or training through a study of their creative, imaginative and intellectual lives. It examines the efforts of military authorities to provide solutions to military boredom (and the problem of discipline and morale) through the provisioning of entertainment and education, but more importantly explores the ways in which soldiers responded to such efforts, arguing that soldiers used entertainment and education in ways that suited them. The focus in the book is on Australians and their experiences, primarily during the First World War, but with subsequent chapters taking the story through the Second World War to the Vietnam War. This focus on a single national group allows questions to be raised about what might (or might not) be exceptional about the experiences of a particular national group, and the ways national identity can shape an individual's relationship and engagement with education and entertainment. It can also suggest the continuities and changes in these experiences through the course of three wars. The story of Australians at war illuminates a much broader story of the experience of war and people's responses to war in the twentieth century.