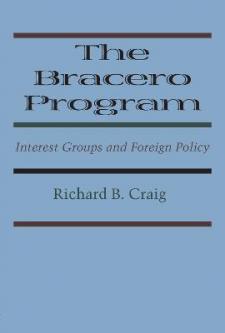 Long before "Cesar Chavez" and "Chicano" became commonly known, the word "bracero" had established itself in the language of American politics. The Mexican Farm Labor Program-or bracero program as it came to be known-was from its inception in 1942 a highly controversial issue. At international, national, and subnational levels, it remained the focal point of an intense interest-group struggle. This struggle and its group combatants provide the central concern of this study.

In the early 1940's agribusiness interests had sought to contract Mexican laborers ("braceros") for work on United States farms. With the entry of the United States into World War II, legislation was passed for contracting braceros on a large scale. What was originally a wartime measure soon became an institution. During twenty-two years, 4.2 million braceros were contracted. The United States, at the insistence of the Mexican government, became a partner in the program, ensuring that the braceros were provided housing, set wages, and other benefits.

The program was, however, detrimental to one group in the United States: the native farmworker. Not only was the bracero provided guarantees that the native could not demand, but the bracero also got the native's job.

During the late forties and fifties, organized labor gathered its forces in Congress to oppose the program. Finally, an administration favorable to the native farmworker threw its support behind the native laborer, and through the Department of labor measures were passed that made it less attractive to hire foreign labor.

In the end, the anti-bracero forces won out in Congress and defeated extension of the Mexican Farm Labor program. At the same time, the United States government, by setting the working standards for foreign workers, brought about an improvement in the working conditions and wages of native farm laborers.

Besides the conflicts between domestic interests, Craig examines the international conflicts and issues involved, as well as the international agreements that were the basis of bracero contracting. He discusses with perception the program's immediate and long-range effects on Mexico. His study analyzes and clarifies one of the most controversial domestic and international programs of the twentieth century.