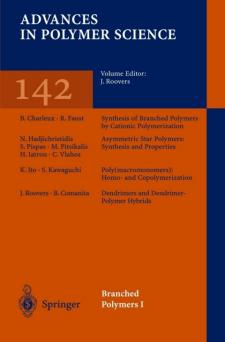 While books have been written on many topics of Polymer Science, no compre hensive treatise on long chain branching has ever been composed. This series of reviews in Volume 142 and 143 of Advances in Polymer Science tries to fill this gap by highlighting active areas of research on branched polymers. Long chain branching is a phenomenon observed in synthetic polymers and in some natural polysaccharides. It has long been recognized as a major mole cular parameter of macromolecules. Its presence was first surmised by H. Stau dinger and G. V. Schuh (Ber. 68, 2320, 1935). Interestingly, their method of iden tification by means of the abnormal relation between intrinsic viscosity and molecular weight has survived to this day. Indeed, the most sophisticated method for analysis of long chain branching uses size exclusion fractionation with the simultaneous recording of mass, molecular weight and intrinsic visco sity of the fractions. In the 1940s and 1950s, random branching in polymers and its effect on their properties was studied by Stockmayer, Flory, Zimm and many others. Their work remains a milestone on the subject to this day. Flory dedicated several chapters of his "Principles of Polymer Chemistry" to non linear polymers. Especially important at that time was the view that randomly branched polymers are inter mediates to polymeric networks. Further developments in randomly branched polymers came from the introduction of percolation theory. The modern aspec ts of this topic are elaborated here in the chapter by W. Burchard.