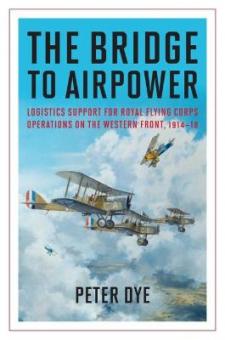 The Bridge to Airpower

In the latest addition to the History of Military Aviation series, Peter Dye describes how the development of the air weapon on the Western Front during World War I required a radical and unprecedented change in the way that national resources were employed to exploit a technological opportunity. World War I has long been recognized as an industrial war that consumed vast amounts of materiel and where logistical superiority gave the Allies an overwhelming advantage. The Bridge to Air Power is the first study that demonstrates how logistical competence provided a war-winning advantage for the Royal Flying Corps, the precursor to the Royal Air Force. It draws on a wide range of literature and original material to quantify these achievements while providing a series of illuminating case studies based around key battles. In particular, it highlights how the Royal Flying Corps' logistical organization was able to maintain high levels of resilience and agility while sustaining military outputs under widely different operational conditions - successfully introducing many of the techniques that now comprise modern supply chain management.