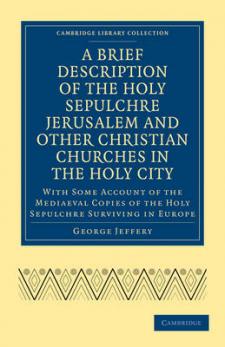 As the purported site of the resurrection of Jesus, the Church of the Holy Sepulchre has been a centre of pilgrimage since at least the fourth century CE. The church has survived through fire, invasion, neglect and near-destruction. The result of such a turbulent history is an extraordinarily intricate and intriguing building. George Jeffery's 1919 book, compiled from his own meticulous scrutiny of the site, is an in-depth chronicle of the church's amazing history and serves as an informative guide to many of its most interesting details. The book features plans and illustrations of the church's numerous phases of construction, and historical accounts of the building from its earliest origins, as well as descriptions of the nearby Augustinian convent and other holy sites of interest within the walls of Jerusalem. Also included is a comprehensive discussion of the many European copies of the church constructed during the middle ages.