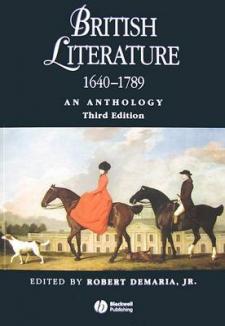 The third edition of this successful anthology is a thoroughly updated collection of historical literatures that span the period from the British Civil War to the French Revolution. * Fully updated, this anthology retains the historical span and range of major and minor literatures that made the first two editions so successful * Represents many texts in their entirety and in their earliest recoverable versions * Includes longer selections from some writers too scantly represented in the previous edition including Equiano Mary Barber and Anne Wharton * Additional works by major authors, including Pope's Eloisa to Abelard, and a portion of Lucy Hutchinson's Order in Disorder. * Writers such as Abiezer Cope, John Armstrong, and Ephraim Chambers, have been restored from the first edition * Includes new drama selections * Added timelines, an alternative listing of contents by theme, and updated head notes make this volume especially accessible to beginning students