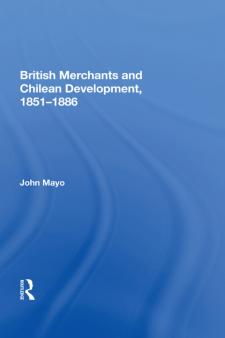 Nineteenth-century Chile was an exceptional phenomenon in Latin America: Constitutional procedures were observed, the army remained in its barracks, and development proceeded at a perceptible pace, even to contemporary observers. This book examines the enormous contribution British merchants made toward Chilean prosperity and stability during this period. The prospect of trade initially brought the British to Chile in the early 1800s. Great Britain soon provided the largest markets for Chilean produce, and British factories produced the largest share of Chile’s manufactured imports. British merchants organized the trade and provided services and expertise wherever needed. John Mayo documents the economic aspects of the British presence in Chile, but he also surveys the social, diplomatic, and political relations between the two countries. What emerges is a picture of a mutually profitable partnership based on the simplest of all motives—self-interest.