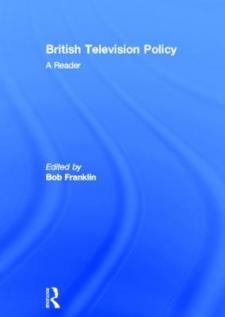 British Television Policy: A Reader provides a forum for the significant policy debates which have informed and shaped television broadcasting since the publication in 1986 of the Peacock Committee Report on the financing of the BBC. The Reader presents key documents and critically analyses their impact on the organisation, financial resources, programme content, editorial philosophy and the regulatory environment of television broadcasting.
Recognising that policy making is not wholly a prerogative of government, British Television Policy provides readers with access to a wide range of statutory and non-governmental documents which have affected British broadcasting legislation: Acts of Parliament; Private Members' Bills; Select Committee Reports; Official statements by Ministers; Parliamentary inquiries such as the Davies Report; Policy documents prepared by interest groups such as the Campaign for Quality Television and the Voice of the Listener and Viewer; Strategic announcements from the ITC; Statements from the BBC and ITV; Public lectures by media owners and executives such as Rupert Murdoch and Richard Eyre; Commentaries from media academics and media analysts.
Beginning with a comprehensive editorial introduction which details television policy since 1945, the Reader is arranged in thematic sections which explore the purpose of television broadcasting, the financing of television, broadcasting policy and quality, regulation, and the relationship of broadcasting and politics. Each section is accompanied by an editor's introduction and commentary and the Reader is supported by a glossary and a guide to further reading.