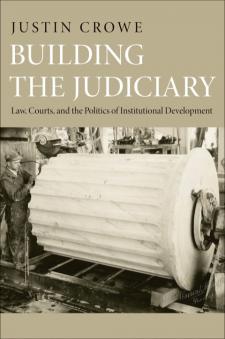 How did the federal judiciary transcend early limitations to become a powerful institution of American governance? How did the Supreme Court move from political irrelevance to political centrality? Building the Judiciary uncovers the causes and consequences of judicial institution-building in the United States from the commencement of the new government in 1789 through the close of the twentieth century. Explaining why and how the federal judiciary became an independent, autonomous, and powerful political institution, Justin Crowe moves away from the notion that the judiciary is exceptional in the scheme of American politics, illustrating instead how it is subject to the same architectonic politics as other political institutions. Arguing that judicial institution-building is fundamentally based on a series of contested questions regarding institutional design and delegation, Crowe develops a theory to explain why political actors seek to build the judiciary and the conditions under which they are successful. He both demonstrates how the motivations of institution-builders ranged from substantive policy to partisan and electoral politics to judicial performance, and details how reform was often provoked by substantial changes in the political universe or transformational entrepreneurship by political leaders. Embedding case studies of landmark institution-building episodes within a contextual understanding of each era under consideration, Crowe presents a historically rich narrative that offers analytically grounded explanations for why judicial institution-building was pursued, how it was accomplished, and what--in the broader scheme of American constitutional democracy--it achieved.