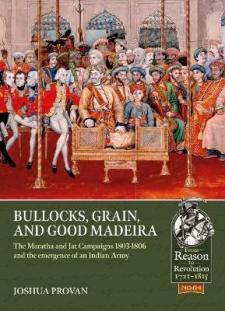 On the last day of the year 1802 the Maratha Peshwa Bajirao II signed the treaty of Bassein which sparked the Second Anglo Maratha War. What began as a seemingly straightforward operation to restore the Peshwa and complete Lord Wellesley's expansionist policy turned into a full-scale conflict for political hegemony which spread across central and northern India and was to establish the East India Company as the foremost power in South Asia.

In military terms it was the event which a little-known general named Arthur Wellesley came to prominence and it also established the supremacy of the EIC's Native Army over the regular armies of the 'country powers.' It was during these testing campaigns that Europeans began to view what was already being called the 'Indian Army' with respect.

Despite a series of crushing defeats, the Marathas stunned their enemies with their bravery and professionalism, exacting a heavy toll on the British despite great handicaps in command and control.

Although successful, the conclusion of the war was much less glorious than the biographies of the Duke of Wellington care to admit. Few conflicts from this time convey in such detail the challenges faced by field commanders conducting operations in India and fewer books continue the story of the Second Maratha War to its ultimate conclusion in the Punjab where the last Maratha prince surrendered, this after the British 'siege lords' under General Lake had been humbled before the mighty mud walls of the impregnable Jat fortress of Bharatpur.