Byzantine Rome and the Greek Popes 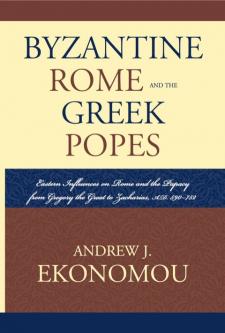 Byzantine Rome and the Greek Popes examines the scope and extent to which the East influenced Rome and the Papacy following the Justinian Reconquest of Italy in the middle of the sixth century through the pontificate of Zacharias and the collapse of the exarchate of Ravenna in 752. A combination of factors resulted in the arrival of significant numbers of easterners in Rome, and those immigrants had brought with them a number of eastern customs and practices previously unknown in the city. Greek influence became apparent in art, religious ceremonial and liturgics, sacred music, the rhetoric of doctrinal debate, the growth of eastern monastic communities, and charitable institutions, and the proliferation of the cults of eastern saints and ecclesiastical feast days and, in particular, devotion to the Theotokos or Mother of God. From the late seventh to the middle of the eighth century, eleven of the thirteen Roman pontiffs were the sons of families of eastern provenance. While conceding that over the course of the seventh century Rome indeed experienced the impact of an important Greek element, some scholars of the period have insisted that the degree to which Rome and the Papacy were 'orientalized' has been exaggerated, while others argue that the extent of their 'byzantinization' has not been fully appreciated. The question has also been raised as to whether Rome's oriental popes were responsible for sowing the seeds of separatism from Byzantium and laying the foundation for a future papal state, or whether they were loyal imperial subjects ever steadfast politically, although not always so in matters of the faith, to the reigning sovereign in Constantinople. Finally, there is the important issue of whether one could still speak of a single and undivided imperium Roman christianum in the seventh and early eighth centuries or whether the concept of imperial unity in the epoch following Gregory the Great was a quaint and fanciful fiction as East and West, ignoring and misunderstanding one another, began to go their separate ways. Byzantine Rome and the Greek Popes provides a guide through this complicated and often contradictory history.