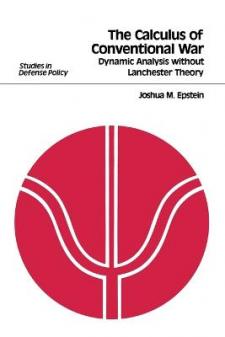 The Calculus of Conventional War

Conventional forces absorb the preponderance of America's defense spending. Further, most experts believe the most likely path to nuclear war is through a failure of conventional defense. It is therefore critical that conventional military balances be assessed rigorously by techniques that go beyond the familiar static comparison of opposing military inventories and explicitly represent warfare's dynamic factors.For decades, a single set of tools has dominated the dynamic analysis of conventional balances: the Lanchester equations, named for their inventor, Frederick William Lanchester.

In this study, Joshua M. Epstein makes two separate contributions. He argues that Lanchester's equations fail to capture the basic dynamics of warfare and that they offer a fundamentally implausible picture of combat. He also presents new, alternative equations of his own. These, he contends, do capture warfare's essential dynamics, which Lanchester theory is incapable of representing.

Epstein's methods are of immediate practical relevance in assessing the requirements of defense in the specific contingencies for which the United States and its allies must plan and in setting defense priorities accordingly.