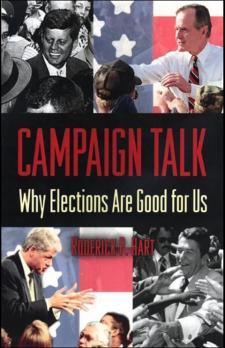 Roderick Hart may be among the few Americans who believe that what politicians say in a campaign actually matters. He also believes that campaigns work. Even as television coverage, political ads, and opinion polls turn elections into field days for marketing professionals, Hart argues convincingly that campaigns do play their role in sustaining democracy, mainly because they bring about a dialogue among candidates, the press, and the people. Here he takes a close look at the exchange of ideas through language used in campaign speeches, political advertising, public debates, print and broadcast news, and a wide variety of letters to the editor. In each case, the participants choose their words differently, and this, according to Hart, can be a frustrating challenge to anyone trying to make sense of the issues. Yet he finds that the process is good for Americans: campaigns inform us about issues, sensitize us to the concerns of others, and either encourage us to vote or at least heighten our sense of the political world. Hart comes to his conclusions by using DICTION, a computer program that has enabled him to unearth substantive data, such as the many subtle shifts found in political language, over the past fifty years. This approach yields a rich variety of insights, including empirically based explanations of impressions created by political candidates. For example, in 1996 Bill Clinton successfully connected with voters by using many human-interest words--"you," "us," "people," "family." Bob Dole, however, alienated the public and even undermined his own claims of optimism by using an abundance of denial words--"can't," "shouldn't," "couldn't." Hart also tracks issue buzzwords such as "Medicare" to show how candidates and voters define and readjust their positions throughout the campaign dialogue. In the midst of today's increased media hype surrounding elections, Americans and the candidates they elect do seem to be listening to each other--as much as they did in years gone by. Hart's wide-ranging, objective investigation upends many of our stereotypes about political life and presents a new, more bracing, understanding of contemporary electoral behavior.