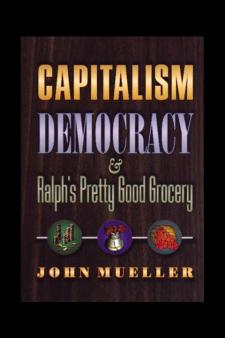 Democracy is overrated. Capitalism, on the other hand, doesn't get enough credit. In this provocative and engaging book, John Mueller argues that these mismatches between image and reality create significant political and economic problems--inspiring instability, inefficiency, and widespread cynicism. We would be far better off, he writes, if we recognized that neither system is ideal or disastrous and accepted instead the humdrum truth that both are "pretty good." And, to Mueller, that means good enough. He declares that what is true of Garrison Keillor's fictional store "Ralph's Pretty Good Grocery" is also true of democracy and capitalism: if you can't get what you want there, "you can probably get along without it." Mueller begins by noting that capitalism is commonly thought to celebrate greed and to require discourtesy, deceit, and callousness. However, with examples that range from car dealerships and corporate boardrooms to the shop of an eighteenth-century silk merchant, Mueller shows that capitalism in fact tends to reward behavior that is honest, fair, civil, and compassionate. He argues that this gap between image and reality hampers economic development by encouraging people to behave dishonestly, unfairly, and discourteously to try to get ahead and to neglect the virtuous behavior that is an important source of efficiency and gain. The problem with democracy's image, by contrast, is that our expectations are too high. We are too often led by theorists, reformers, and romantics to believe that democracy should consist of egalitarianism and avid civic participation. In fact, democracy will always be chaotic, unequal, and marked by apathy. It offers reasonable freedom and security, but not political paradise. To idealize democracy, Mueller writes, is to undermine it, since the inevitable contrast with reality creates public cynicism and can hamper democracy's growth and development. Mueller presents these arguments with sophistication, wit, and erudition. He combines mastery of current political and economic literature with references to figures ranging from Plato to P. T. Barnum, from Immanuel Kant to Ronald Reagan, from Shakespeare to Frank Capra. Broad in scope and rich in detail, the book will provoke debate among economists, political scientists, and anyone interested in the problems (or non-problems) of modern democracy and capitalism.