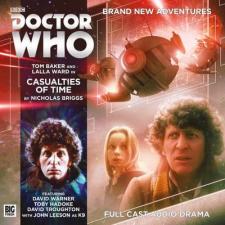 Note: This adventure continues on from last month's iDoctor Who: The Pursuit of History. This range of two-part audio dramas stars Tom Baker reprising his most popular role as the Fourth Doctor (from 1974 - 1981) with a number of his original TV companions. This fifth series reunites the Doctor with Romana (Lalla Ward), a fellow Time Lord for adventures across Time and Space! The TARDIS crew have unknowingly become embroiled in a web of deceit. A trap has been laid across time and they have no possible means of escape. Destiny has ensnared them. The Doctor is finally getting the chance to see the Conglomerate's work at first hand. Romana is working to save the alien Laan once and for all. K9 is returning to Ancient Britain in search of an unusual power source; the Doctor, Romana and K9. Today one of them will die. The pairing of the Doctor and Romana harks back to the most-watched period of Doctor Who, one that to a generation is the most loved and iconic and which broke the records for viewers of the show. Tom Baker's portrayal of the Fourth Doctor Who still tops popularity polls today. He was a special guest in 2013's 50th anniversary story Doctor Who - The Day of the Doctor.
Guest David Warner is a familiar face from a wealth of quality appearances on TV and film - for Sci-Fi fans in particular he's recognised from Star Trek: The Next Generation, Doctor Who, Time Bandits, and two Star Trek movies: though this just scratches the surface of a rich career.Guest David Troughton is the son of the second Doctor actor, Patrick Troughton, and in a long, varied career has appeared on TV in everything from A Very Peculiar Practice to Doctor Who. CAST: Tom Baker (The Doctor), Lalla Ward (Romana), John Leeson (K9), David Warner (Cuthbert), Toby Hadoke (Mr Dorrick), David Troughton (The Black Guardian).