A Catalogue of the Medieval Manuscripts in the University Library, Aberdeen 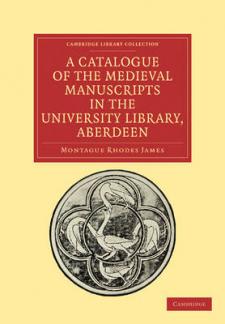 M. R. James (1862-1936) is probably best remembered as a writer of chilling ghost stories, but he was an outstanding scholar of medieval literature and palaeography, who served as Provost of King's College, Cambridge, and later as Provost of Eton. His detailed descriptive catalogues of manuscripts owned by colleges, cathedrals and museums are still sought after by scholars today. This catalogue, originally published in 1932, describes just over 80 medieval manuscripts. Thirty of them, mostly later medieval works on canon law or the history of Aberdeen, came to the library from King's College. The remainder, many from the twelfth and thirteenth centuries, and regarded as more important by James, belong to the Marischal College collection, which originated in a 1624 bequest and contains several manuscripts formerly owned by St Paul's Cathedral, London. James describes their structure, content, provenance and decoration, and the book is illustrated by 27 plates.