Centurions of a Century 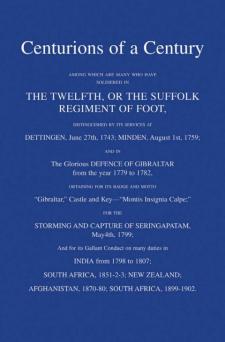 This book is dedicated, first to the 12th (now Suffolk) Regiment and secondly to the youth of HM's dominions in the hope that they may train themselves to do, in time of need, decisive things. The author served in the Suffolks for 27 years and he is writing four months after the outbreak of the Great War. It is not a record of the doings of the Suffolk regiment but rather an account of Britain's campaigns, battles and leaders as well as (Suffolk) regimental actions and regimental life, all spread over more than a hundred years. It begins with an introductory account of the early days (1660 onwards) of the Army and Navy, goes on to Marlborough's wars, the Indian Mutiny and then turns its attention to Napoleon, Wellington and Nelson and their wars. It treats the New Zealand War, Ashanti and Abyssinia and other colonial wars up to the death of Queen Victoria.