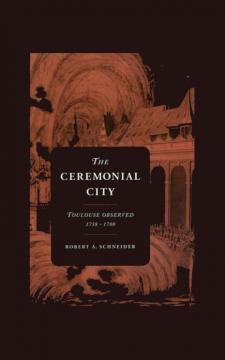 From public executions to religious processions to political festivities, Toulouse's ceremonial life was remarkably rich in the decades prior to the French Revolution. In an engaging portrait that conveys this provincial city in all its splendor and misery, Robert Schneider explores how Toulouse's civic and community life was represented in the stagings of various ceremonies. His inquiry is based on the unpublished diaries of Pierre Barthes, a Latin tutor who was both a devout Catholic and a monarchist, and who recorded forty years of public activity in ways that reflected the mounting social tensions of his times. By analyzing Barthes's accounts, Schneider demonstrates how the variety of ceremonial forms embodied different ritual dynamics and represented contrasting values. The author focuses most intently on the differences between the solemn religious procession, which was highly participatory and represented local concerns, and the more celebratory festival, which vaunted the monarchy and turned the people into passive spectators. He examines the theatrical nature of often hastily orchestrated religious parades winding through neighborhood streets, then considers the monarchy's use of plazas for staged entertainment, particularly for awe-inspiring displays of fireworks. Schneider argues that the festival proved a successful tool in imposing the symbols of the centralized state on Toulouse's public life, but that both the procession and the festival incorporated powerful ceremonial forms that proved politically useful for the Revolution.