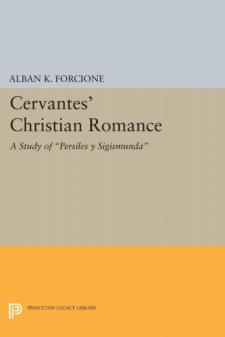 Alban Forcione analyzes the problem which has most troubled modern readers of the Persiles, its episodic character and confusing proliferation of action. Examining closely the structure of the romance Cervantes considered his masterpiece and boldest contribution to literature, Mr. Forcione discerns in it a simple pattern: a coherent cycle of catastrophe and restoration linked symbolically to the Christian vision of man's fall and redemption. Originally published in 1972. The Princeton Legacy Library uses the latest print-on-demand technology to again make available previously out-of-print books from the distinguished backlist of Princeton University Press. These editions preserve the original texts of these important books while presenting them in durable paperback and hardcover editions. The goal of the Princeton Legacy Library is to vastly increase access to the rich scholarly heritage found in the thousands of books published by Princeton University Press since its founding in 1905.