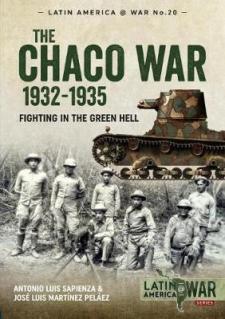 The Chaco War was the first modern conflict in South America. Over time, it became the topic of many volumes published in both Bolivia and Paraguay - first by veterans, such as the commanders-in-chief, and the commanders of army corps', regiments or battalions, and by other ranks, in the form of personal memoirs or wider histories, and using a wide variety of sources. Subsequently, the conflict attracted attention of many foreign writers, foremost from the United States of America and Europe, who researched it with great interest. Hundreds of related articles have also been published.

Nevertheless, 'The Chaco War, 1932-1935' is the first ever concise history of this conflict, providing the reader with the full background to this conflict, the military build-up of the Bolivian and Paraguayan armed forces, a blow-by-blow account of Bolivian penetration of this territory since the early 20th Century, precise details on troops mobilised for the war by both sides, all of the battles fought between the belligerents, and their casualties.

Two very different military concepts faced each other: the German General Hans Kundt, a First World War veteran, hired by the Bolivian Government, was a proponent of the typical Prussian tactics of front attacks regardless of cost, but also of the strategy of taking and controlling as much territory as possible without annihilating the enemy.

The Paraguayan Lieutenant-Colonel Jose Felix Estigarribia (later promoted to Colonel, and then General), took his specialization courses in Chile and France, and was a proponent of tactics of using trench warfare for defence, and flanking the enemy when in the offensive.

Eventually, Estigarribia's ideas proved their worth - partially because his forces managed to capture huge stocks of Bolivian arms and ammunition throughout the war.

This is also the first book to provide an exclusive collection of photographs from the archives of the Institute of History and Military Museum of Ministry of National Defence of Paraguay, and several private archives in Paraguay and Bolivia.

Perfectly complementing the earlier volume The Chaco Air War of the Latin America@War series, The Chaco War provides an indispensable, single-point-source-of-reference for enthusiasts and professionals alike.