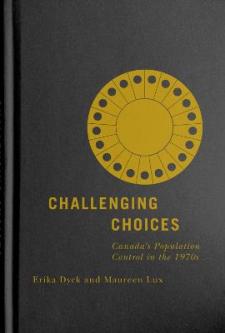 Between the decriminalization of contraception in 1969 and the introduction of the Charter of Rights and Freedoms in 1982, a landmark decade in the struggle for women's rights, public discourse about birth control and family planning was transformed. At the same time, a transnational conversation about the "population bomb" that threatened global famine caused by overpopulation embraced birth control technologies for a different set of reasons, revisiting controversial ideas about eugenics, heredity, and degeneration. In Challenging Choices Erika Dyck and Maureen Lux argue that reproductive politics in 1970s Canada were shaped by competing ideologies on global population control, poverty, personal autonomy, race, and gender. For some Canadians the 1970s did not bring about an era of reproductive liberty but instead reinforced traditional power dynamics and paternalistic structures of authority. Dyck and Lux present case studies of four groups of Canadians who were routinely excluded from progressive, reformist discourse: Indigenous women and their communities, those with intellectual and physical disabilities, teenage girls, and men. In different ways, each faced new levels of government regulation, scrutiny, or state intervention as they negotiated their reproductive health, rights, and responsibilities in the so-called era of sexual liberation. While acknowledging the reproductive rights gains that were made in the 1970s, the authors argue that the legal changes affected Canadians differently depending on age, social position, gender, health status, and cultural background. Illustrating the many ways to plan a modern family, these case studies reveal how the relative merits of life and choice were pitted against each other to create a new moral landscape for evaluating classic questions about population control.