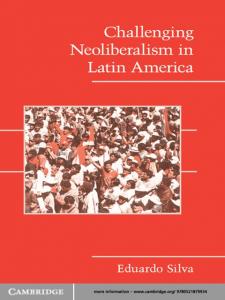 At the turn of the twentieth century, a concatenation of diverse social movements arose unexpectedly in Latin America, culminating in massive anti-free market demonstrations. These events ushered in governments in Argentina, Bolivia, Ecuador, and Venezuela that advocated socialization and planning, challenging the consensus over neoliberal hegemony and the weakness of movements to oppose it. Eduardo Silva offers the first comprehensive comparative account of these extraordinary events, arguing that the shift was influenced by favorable political associational space, a reformist orientation to demands, economic crisis, and mechanisms that facilitated horizontal linkages among a wide variety of social movement organizations. His analysis applies Karl Polanyi's theory of the double movement of market society to these events, predicting the dawning of an era more supportive of government intervention in the economy and society.