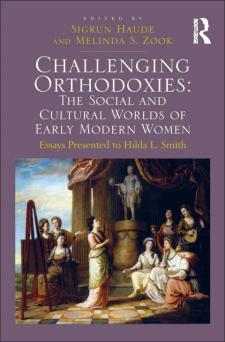 Offering a broad and eclectic approach to the experience and activities of early modern women, Challenging Orthodoxies presents new research from a group of leading voices in their respective fields. Each essay confronts some received wisdom, 'truth' or orthodoxy in social and cultural, scientific and intellectual, and political and legal traditions, to demonstrate how women from a range of social classes could challenge the conventional thinking of their time as well as the ways in which they have been traditionally portrayed by scholars. Subjects include women's relationship to guns and gunpowder, the law and legal discourse, religion, public finances, and the new science in early modern Europe, as well as women and indentured servitude in the New World. A testament to the pioneering work of Hilda L. Smith, this collection makes a valuable contribution to scholarship in women's studies, political science, history, religion and literature.