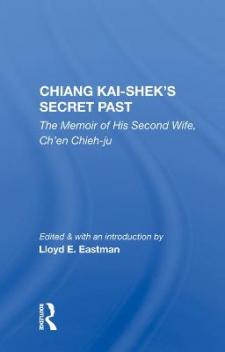 This engrossing memoir tells the fascinating story of one of China's great leaders during the Nationalist revolution of the 1920s and of the woman who paid a staggering price so that he could attain his ambition. The tale begins in 1919 when the thirty-two-year-old Chiang Kai-shek met the naA-ve thirteen-year-old whom he would call Ch'en Chieh-ju. He pursued her relentlessly for two years until she finally agreed to marry her brash and forceful suitor. Chieh-ju was at her husband's side constantly for the seven years of their marriage, which enabled her to chronicle with immediacy and vivid detail his single-minded pursuit of power in the Kuomintang (KMT). So explosive were her revelations that the KMT used threats and bribes to block U.S. publication plans in the 1960s. Now, her long-suppressed memoir finally reveals Chiang Kai-shek's human side, which has been shrouded in myth. Chiang Kai-shek emerges as a lustful, ill-tempered, quarrelsome, stubborn, and boundlessly ambitious man. In pursuit of his goals, he abandoned the young wife he seemingly loved to make a politically expedient alliance with Soong Mei-ling, now famed as Madame Chiang. Despite his betrayal, Chieh-ju's love for her husband is clearly evident. She paints here a stirring portrait of their personal life as well as of the infighting and intrigue that marked her husband's early political career. Above all, her story conveys a keen sense of the texture of upper-class life in the China of that period, a quality academic studies rarely capture.