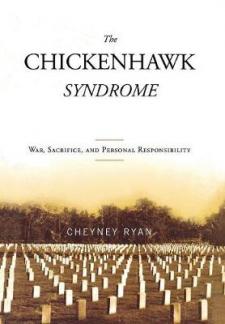 In recent years, the question of war and sacrifice has been a major topic of political debate and controversy. If our country goes to war for reasons we endorse, what is our responsibility to share in its sacrifices? Does supporting a war mean serving in it? Does it mean encouraging our children to do so? Such questions have been posed by the so-called 'chickenhawk' phenomenon: pro-war leaders and their pro-war children who call on Americans to assume the burden of war and its sacrifices, but avoid those sacrifices themselves. President Bush and other architects of the Iraq conflict were the most prominent chickenhawks. Cheyney C. Ryan argues that the chickenhawk issue is not just a matter of personalities_it will remain with us for a long time even though the Bush administration has left office. Ryan poses fundamental questions of war and personal sacrifice, pointing to the basic disconnection in American politics generally between the support for war and the willingness to assume its costs, which he calls 'Alienated War.' Calling for the reinvigoration of civic involvement, this illuminating and insightful book offers both a philosophical and historical exploration of America's citizen-soldier tradition and the consequences involved in separating the citizenry from the armed forces.