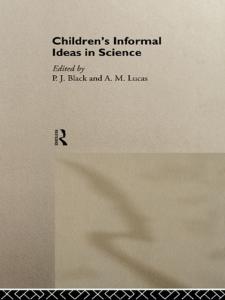 The ideas that children have about science concepts have for the past decade been the subject of a wealth of international research. But while the area has been strong in terms of data, it has suffered from a lack of theory. Children's Informal Ideas in Science addresses the question of whether children's ideas about science can be explained in a single theoretical framework. Twelve different approaches combine to tackle this central issue, each taking a deliberately critical standpoint. The contributors address such themes as values in research, the social construction of knowledge and the work of Piaget in a rich contribution to the debate without claiming finally to resolve it. The authors conclude with a discussion of how a theory can be built up, along with suggestions for ways ahead in the research.