China and the West 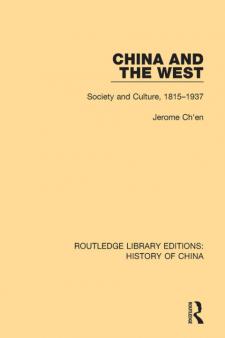 This penetrating study of China's social and cultural contacts with the West, first published in 1979, analyses the early images that China and the West had of one another, and the illusions and misconceptions that arose from these images. The book centres on the question, why did China fail to become modernised through contact with the West before the 1930s? The author examines the roles played by the agents of change - emigrants, missionaries, traders, scholars and diplomats - and the political, economic, social and cultural developments which the transmission of their ideas set in motion. The book also looks at the ways in which change was frustrated by the rulers of the country, the leaders of the imperial government and later the warlords, politicians and followers of Chiang Kai-shek. Through the author's analysis of the complex factors involved, based on extensive original research into private archive material from all over the world, and his study of the influence of centuries of Chinese cultural tradition, China's slow path to modernisation is explained and illuminated.