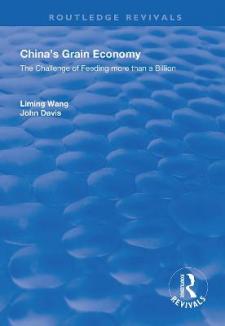 This book was originally pubished in 2000. China is the largest developing country in the world and is still heavily based on agriculture. Currently, about 70 per cent of China's total of more than one bilion people live in rural areas, and about half of the total national labour force is involved in agricultural activities. It is clear that agriculture is the foundation for the development of the Chinese national economy. Within agriculture, the grain economy is the most important sector: indeed it has been recognised as a treasure in managing the country by all past Chinese dynasties. Ensuring enough grain supply to meet the demands of such a huge population seems to be a long-term goal for the Chinese government and this book explores whether China will be able to produce enough grain to keep pace with its population increases.