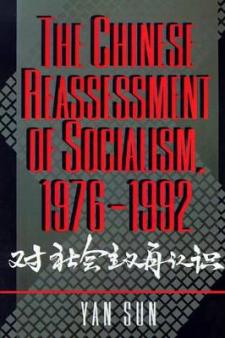 A momentous debate has been unfolding in China over the last fifteen years, only intermittently in public view, concerning the merits of socialism as a philosophy of social justice and as a program for national development. Just as Deng Xiaoping's better advertised experiment with market- based reforms has challenged Marxist-Leninist dogma on economic policy, the years since the death of Mao Zedong have seen a profound reexamination of a more basic question: to what extent are the root problems of the system due to Chinese socialism and Marxism generally? Here Yan Sun gathers a remarkable group of primary materials, drawn from an unusual range of sources, to present the most systematic and comprehensive study of post-Mao reappraisal of China's socialist theory and practice. Rejecting an assumption often made in the West, that Chinese socialist thought has little bearing on politics and policymaking, Sun takes the arguments of the post-Mao era seriously on their own terms.
She identifies the major factions in the debate, reveals the interplay among official and unofficial forces, and charts the development of the debate from an initially parochial concern with problems raised by Chinese practice to a grand critique of the theory of socialism itself. She concludes with an enlightening comparison of the reassessments undertaken by Deng Xiaoping with those of Gorbachev, linking them to the divergent outcomes of reform and revolution in their respective countries.