The Christian and Missionary Alliance 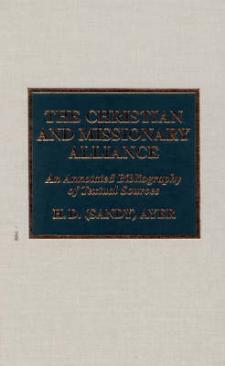 The Christian and Missionary Alliance (C&MA), which officially became a denomination in 1974, evolved from a mission society and a "deeper life" association founded in 1887 by A.B. Simpson, a Canadian ex-Presbyterian pastor based in New York City. Simpson and his followers have played a leading role in theological education, the propagation of premillennialist doctrine, the Protestant missionary movement, the divine healing and deeper life movements, the development of Pentecostalism, and evangelicalism in general. This bibliography provides guided access to more than 2,300 books, articles, essays, pamphlets, theses, dissertations, and tracts that document the history and thought of the Alliance, a group with more than 2.4 million followers worldwide. Many of these citations direct the researcher to relatively obscure works that have heretofore been all but inaccessible to the academic community. Especially thorough coverage is granted to the works of A.B. Simpson and A.W. Tozer, two of the most influential leaders of the C&MA. A list of the more than 170 periodicals that have been issued by the Alliance is included, as are personal name and subject indexes. Little has been published on the Alliance to date, despite the recent surge in scholarly interest in evangelicalism and Pentecostalism. This work redresses that imbalance by opening to church historians, missiologists, sociologists of religion, and other scholars the riches of the Alliance oeuvre.