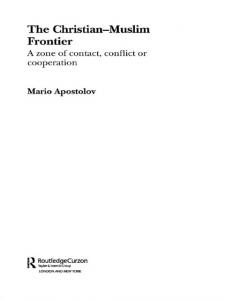 The Christian-Muslim Frontier describes the historical formation of this zone, and its contemporary dimensions: geopolitical, psychological, economic and security. Special attention is given to the concept of state-frontiers, to the effects of the uneven development of nation states and the contemporary interspersing of communities, which creates new functional frontiers. Further, the frontier is described as a mental construction, imagined by people in their search for social order, individual and collective security. Apostolov demonstrates that it is the political and economic situation of the local people that determines whether these frontiers result in conflict or cooperation. Rather than imposing unilateral principles of good governance, and to ensure cooperation prevails in Christian-Muslim relations, he argues that world society needs to undertake multilateral efforts to build participatory political institutions that accommodate groups with different identities.