The Chronicle of the Third Crusade 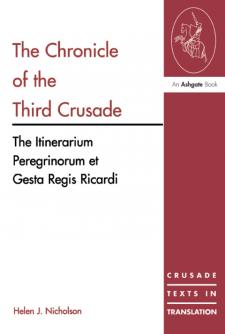 This is a translation of the Itinerarium Peregrinorum et Gesta Regis Ricardi, a contemporary chronicle of the Third Crusade, 1187-1192. Told from the viewpoint of the European crusaders, it recounts the fall of the crusader kingdom of Jerusalem to Saladin in 1187 and the subsequent expeditions to recover it, led by the Emperor Frederick I, King Philip II of France and King Richard I of England, the Lionheart&quote;. This is the most comprehensive account of the crusade. Much of the account is from eyewitness sources and provides vivid and colourful details of the great campaigns. The translator gives background details of the events described, comparing this account with other accounts from Europe, the Christians of the Holy Land and Muslim writers. She also sets out the evidence for the authorship and sources of the chronicle.