Chronicles of Carlingford: The Rector and the Doctor's Family 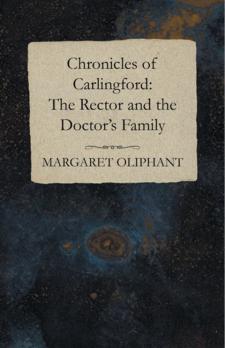 This early work by Margaret Oliphant was originally published in 1863 and we are now republishing it with a brand new introductory biography. These two short novels raise the curtain on an entrancing new world for all who love Jane Austen, George Eliot, and Trollope's "Barsetshire Chronicles". The setting is Carlingford, a small town not far from London in the 1800s. The Rector opens as Carlingford awaits the arrival of their new rector. Will he be high church or low? And, for there are numerous unmarried ladies in Carlingford, will he be a bachelor? The Doctor's Family introduces us to the newly built quarter of Carlingford where young Dr Rider seeks his living. Already burdened by his improvident brother's return from Australia, he is appalled when his brother's family and sister-in-law, Nettie, follow him to Carlingford. Margaret Oliphant was born in Wallyford, Scotland in 1828. When she was ten years old, her family moved to Liverpool, where she began to experiment with writing. She had her first novel, Passages in the Life of Mrs. Margaret Maitlan (1849), published when she was just 21. By the 1860s, Oliphant was a popular and recognized author, and in order to support her family (she had become a widow in 1959) she became an incredibly prolific author. Oliphant eventually went on to write more than 120 works, including novels travelogues, histories and volumes of literary criticism.