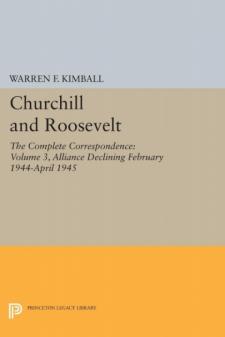 The complete correspondence of Winston Churchill and Franklin D. Roosevelt. Including every written communication that passed between Churchill and Roosevelt during the five and a half years of their wartime leadership, this body of material is essential to an understanding of the politics and strategy of World War II as conducted by two of history's most charismatic men. Volume III takes the correspondence up to Roosevelt's death in April 1945.Originally published in 1984.The Princeton Legacy Library uses the latest print-on-demand technology to again make available previously out-of-print books from the distinguished backlist of Princeton University Press. These editions preserve the original texts of these important books while presenting them in durable paperback and hardcover editions. The goal of the Princeton Legacy Library is to vastly increase access to the rich scholarly heritage found in the thousands of books published by Princeton University Press since its founding in 1905.