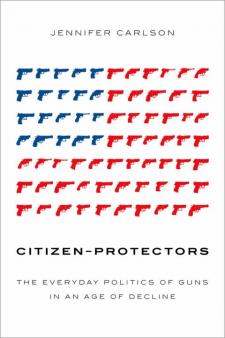 From gang- and drug-related shootings to mass shootings in schools, shopping centers, and movie theatres, reports of gun crimes fill the headlines of newspapers and nightly news programs. At the same time, a different kind of headline has captured public attention: a steady surge in pro-gun sentiment among Americans. In Citizen-Protectors, Jennifer Carlson offers a compelling portrait of gun carriers, shedding light on Americans' complex relationship with guns. Delving headlong into the world of guns, Carlson participated in firearms training classes, attending pro-gun events, and carried a firearm herself. Through these experiences, she explores the role guns play in the lives of Americans who carry them and shows how, against a backdrop of economic insecurity and social instability, gun carrying becomes a means of being a good citizen. A much-needed counterpoint to the rhetorical battles over gun control, Citizen-Protectors is a captivating and revealing look at gun culture in America, and a must-read for anyone with a stake in this heated debate.