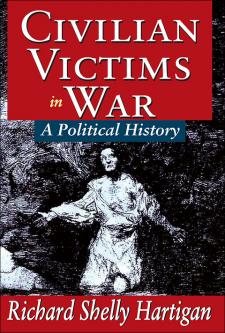 The status of the civilian today is that of a calculated casualty, to die immediately or after agonizing suffering. The civilian is also a hostage in the political power struggle, since his continued safety depends upon the decision or even impulse of his leaders. This is true if he is a citizen of a major power, or if he lives elsewhere in unstable social and political environments. Hartigan's book is a unique effort to deal with a mass, but hidden problem: the status of the civilian non-combatant in conditions of armed conflict.Civilian Victims in War fills the gaps in our knowledge of the origins of civilian immunity, so that a full evaluation of the principle's continued worth may be made. The book reviews the concepts of noncombatants, civilian immunity, how it arose from need and intuition and developed into legal practice. The volume focuses on the development of this concept in the Western tradition, not because civilian immunity was absent in Asia or Africa, but because its present formulation owes its origin and elaboration to European custom, practice, and thought.Civilian Victims in War is the first book to deal with the central theme of the innocent non-combatant. Hartigan seeks to pursue this subject in greater depth, and asks the intelligent layman to reconsider his or her options in the face of modern warfare. He touches on many subjects in this work which will spark interest with the general public and policy personnel, those who should recognize themselves as civilians and see this book as their tragic history.