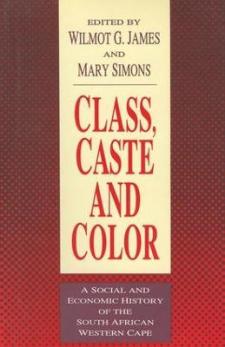 This volume is the first general social and economic history of the Western Cape of South Africa. Until recently, this region had been largely neglected by historians because it does not occupy a central place in the national political economy. Wilmot G. James and Mary Simons argue that a great deal about modern South Africa has been shaped by the distinctive society and economy of the Western Cape. Its history also reveals striking parallels and contrasts with other regions of the African continent.

The Western Cape is the only region of South Africa to have experienced slavery. In this sense, the Western Cape has historical traditions more akin to colonial slave societies of the Americas than to those of the rest of Africa. Moreover, in contrast to the rest of South Africa, a proletariat emerged in the Western Cape early in its history, at the start of the eighteenth century. There developed a much more stable and enduring system of class and labor relations. In the twentieth century, these became closely enmeshed with race and status. Racial paternalism and the close correlation between class, caste, and color have their historical roots in the Western Cape.

The book is arranged thematically and explores the social and economic consequences of slavery and emancipation in the eighteenth and nineteenth centuries. Issues of economy and labor, such as economic underdevelopment in the Western Cape, the labor market, and trade-union organization in the twentieth century are examined. The authors also treat the role of the state in shaping Western Cape society. Class, Caste, and Color is not only a groundbreaking work in the study of South Africa, but provides an agenda for future researchers. It will be essential reading for historians, economists, and Africa area specialists.