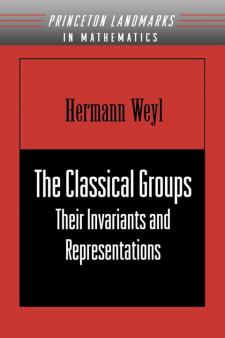 In this renowned volume, Hermann Weyl discusses the symmetric, full linear, orthogonal, and symplectic groups and determines their different invariants and representations. Using basic concepts from algebra, he examines the various properties of the groups. Analysis and topology are used wherever appropriate. The book also covers topics such as matrix algebras, semigroups, commutators, and spinors, which are of great importance in understanding the group-theoretic structure of quantum mechanics. Hermann Weyl was among the greatest mathematicians of the twentieth century. He made fundamental contributions to most branches of mathematics, but he is best remembered as one of the major developers of group theory, a powerful formal method for analyzing abstract and physical systems in which symmetry is present. In The Classical Groups, his most important book, Weyl provided a detailed introduction to the development of group theory, and he did it in a way that motivated and entertained his readers. Departing from most theoretical mathematics books of the time, he introduced historical events and people as well as theorems and proofs. One learned not only about the theory of invariants but also when and where they were originated, and by whom. He once said of his writing, "My work always tried to unite the truth with the beautiful, but when I had to choose one or the other, I usually chose the beautiful." Weyl believed in the overall unity of mathematics and that it should be integrated into other fields. He had serious interest in modern physics, especially quantum mechanics, a field to which The Classical Groups has proved important, as it has to quantum chemistry and other fields. Among the five books Weyl published with Princeton, Algebraic Theory of Numbers inaugurated the Annals of Mathematics Studies book series, a crucial and enduring foundation of Princeton's mathematics list and the most distinguished book series in mathematics.