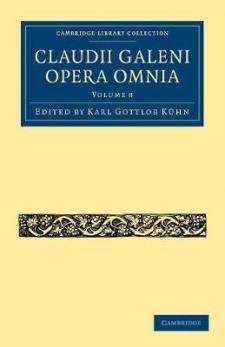 Galen (Claudius Galenus, 129-c. 199 CE) is the most famous physician of the Greco-Roman world whose writings have survived. A Greek from a wealthy family, raised and educated in the Greek city of Pergamon, he acquired his medical education by travelling widely in the Roman world, visiting the famous medical centres and studying with leading doctors. His career took him to Rome, where he was appointed by the emperor Marcus Aurelius as his personal physician; he also served succeeding emperors in this role. A huge corpus of writings on medicine which bear Galen's name has survived. The task of editing and publishing such a corpus, and of identifying the authentic Galenic texts within it, is a hugely challenging one, and the 22-volume edition reissued here, edited by Karl Gottlob Kuhn (1754-1840) and published in Leipzig between 1821 and 1833, has never yet been equalled.