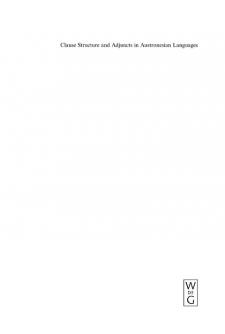 Clause Structure and Adjuncts in Austronesian Languages is a collection of papers devoted to the syntactic analysis of modification and extraction strategies in Austronesian languages such as Kavalan, Malagasy, Niuean, Seediq, and Tagalog. Written by some of the leading scholars in the field, itelucidates the categorial and phrase structural status as well as the scopal behavior of sentence-level adverbs, ordering constraints on adjectival modifiers, and the nature of unbounded dependencies in interaction with Philippine-type voice systems. Guglielmo Cinque's universal ordering hypothesis for adverbs and current work on remnant movement serve as theoretical points of reference.

More particularly the book contains an analysis of lower VP-adverbs in Kavalan as serial verbs (Chang), a defense of two types of adverbial heads in Seediq (Holmer), an account of possible DP-internal serializations in Niuean in terms of remnant movement (Kahnemuyipour Massam), a plea for relative, scope-based adverb ordering in Tagalog (Kaufman), a clefting approach to unbounded dependencies in Malagasy (Potsdam), a critical assessment of constraints on remnant movement as applied to adverb orderings in Malagasy (Thiersch), and an analysis of the Malagasy voice system on the basis of clitic left-dislocation (Travis). The editors' introduction undertakes a critical survey of the relevant empirical and theoretical background.

A substantial part of the empirical facts are presented here for the first time, and the book will inspire additional systematic investigation of the often neglected aspects of modificational strategies in Austronesian languages.

The book will be of value to linguists interested in contemporary syntactic analysis and to everyone seeking a deeper understanding of the formal properties of Austronesian.